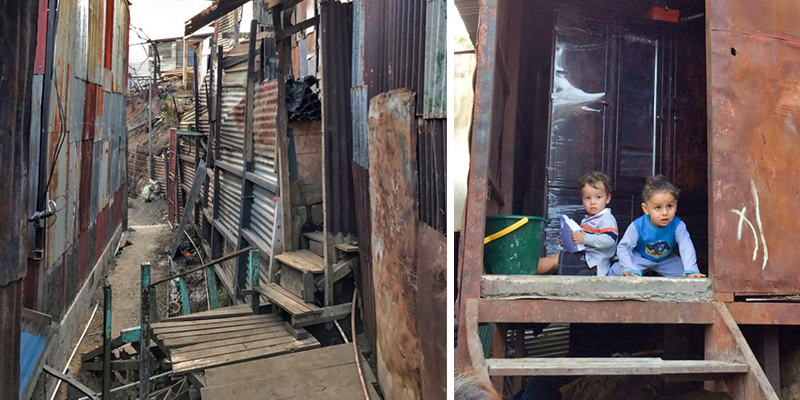 On our February trip to Costa Rica, our team kept busy distributing over 800 pairs of new shoes in just two days. The pre-set itinerary was filled with several gripping distributions, but one unplanned visit challenged their perceptions of hope and despair the most.

We learned about La Milpa at the last minute. A squatter community outside of the capital city, this is a rough section of town. So rough in fact that the police insisted on escorting our team through the makeshift neighborhood— small shelters braced by tin and wood scraps, exposed wires harvesting electricity from below, dirty water pipes scooping runoff from the more prosperous and raw sewage dripping unhampered.

And yet as dire as it sounds—as it is—La Milpa is home to hundreds of families with nowhere else to go. Men, women and children hoping to claim ownership of their small plot of land after the ten-year legal requirement.

Just two weeks before our team’s arrival, a blazing fire burnt through this hope, leaving 24 families homeless. And shoeless. And in need of our assistance.

Our team answered their call for help on a grassy patch behind the community church. The distribution was a lot more informal than usual. No water source for the typical washing of the feet, a plain white tent, a couple of chairs and a conflictingly beautiful view of the city that could make any of us forget—just for a moment—where we were.

Evelyn and her three young sons, eight-year-old Andrew and four-year old twins Angel and Harim, were among the families who gathered. Like the others, they had lost what little they owned to the flames. They had sought refuge in the church for two days, but decided to return to the scorched remains of their home so as to not lose their claim. After all, they had sacrificed so much already to get there, walking five days from their native Nicaragua in search of a better life.

The children should have been in school, but as in many of the countries where we work, they are not allowed to attend without shoes. So getting a new pair of school-appropriate black Nikes meant something very different to them.

Harim whispered a shy thank you when he received his new shoes. His twin brother Angel’s cry for joy at the very sight of the box was louder and just as grateful. Then Andrew and Evelyn.

Once our team had served all the families, they joined them for a short, disorienting walk through the ruins of the fire. The smell of tragedy still lingered, yet the sound of hope rang out in the din of drills and hammers working to rebuild. Like a phoenix rising from the ashes, life was moving on.

It was soon time for our team to say goodbye. And Evelyn and her three children walked away holding hands.