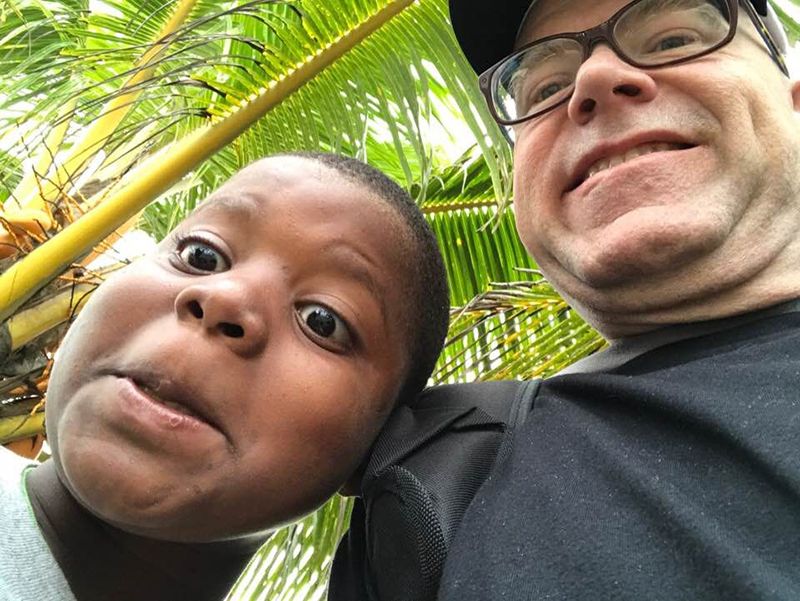 But once in a while, that special moment unfolds into something truly extraordinary—a wrinkle in time that causes the bones to chill, the heart to melt and the mind to wonder if it’s real at all.

Such was the brief encounter between man and child that unfolded this past December in Honduras.

Our team set out for the seaside village of Miami, a small Garifuna settlement in the north of the country. Descendants of various African and indigenous groups, its people live a simple life. That means thatched huts, no electricity and in most cases, no shoes. Without shoes, the children are especially susceptible to potentially debilitating injuries, pain and soil-borne diseases.

The drive along the beach was beautiful, but long and veiled by the gray tint of sprinkling rain. When the van finally pulled up, its passengers stepped out. Among them was Robert Adams-Ghee.

Robert, our Chief Financial Officer, is new to Soles4Souls. This would be his first international distribution on his first trip outside U.S.-Canadian borders, which alone would be enough to overwhelm the senses. So you can imagine his sheer awe when a pair of small hands wrapped around him almost as soon as his feet hit the sand.

At first, it felt unfamiliar. But that soon changed when Robert looked down upon nine-year-old Larson and recognized the reflection of his younger self. Chubby face. Gentle eyes. Looming shadow of poverty. All reminiscent of a boy growing up in Appalachian Tennessee. Had it not been for a few darker shades on his skin, Robert realized, this kid would have been his mirror image. That’s it. All the decades, miles and circumstances between them—and all that separated them was their complexion.

It was time to get to get moving, so Robert joined the others in setting up under the shelter of a few palm trees. Nearly 180 children would be receiving new shoes that day thanks to our corporate partners that furnish product, donors who help offset shipping costs and travelers who distribute on the ground. Their parents were nearly as excited they were, relieved that one of their families’ basic necessities would soon be met; and worked hard to move things along. Unloading the bags, sorting the shoes by size, lining up the children—none of it seemed like work to this community that, despite their isolation and humble existence, was happy. Yes, happy! And responsible. And resilient. And rewarded by a parting of the clouds just as the distribution began.

Larson stood towards the end of the line playing and enjoying the sun while Robert washed and sized little feet. But from time to time, their eyes would take a moment to find each other. Like magnets—waiting for their opposing poles to meet again. So when Larson made it to a fitting chair facing another volunteer, Robert leaped from his seat and took his place. The two now sat face to face.

Neither uttered a word as Robert washed away the sand on Larson’s feet, but they were speaking to each other nonetheless. I am here to serve you, Robert thought. I am grateful, Larson responded.

Robert held back the tears. But inside, he was burning with raw emotion. The work that our supporters make possible does matter. The gift of shoes does make a difference. We are part of something bigger—something good and worthwhile.

That day, Larson received brand new shoes—a pair of sturdy sandals that will protect him from injuries, discomfort and disease while giving his feet plenty of room to grow. And his reaction was nothing short of jubilant, one that Robert understood could only be replicated with the children in his own life by the latest iPhone or iPad or something. Maybe…

As all moments do, this one too came to pass, as Larson walked away with shoes on his feet and Robert finished the work he came to do. The wrinkle in time ended and life was back to normal, but something inside each of them had changed.

The team loaded up the van and as if on cue, it began to rain.