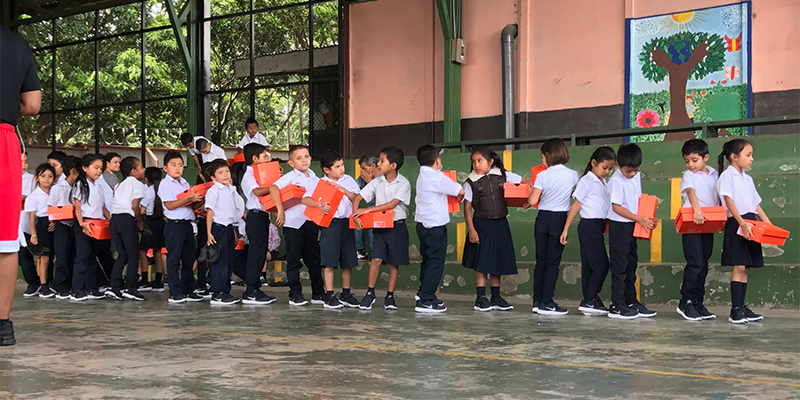 A few months ago, we told you about our team’s trip to La Milpa. This squatter community on the outskirts of Costa Rica’s capital city had recently been devastated by a fire that left 24 families homeless and without shoes to protect them from the debris. Thanks to the generosity of our donors, we were able to make an impromptu visit and serve them in their time of most need.

But as the haunting sights and sounds of this poverty-stricken community lingered, we knew we had to go back.

And so we did this past May with a group of student athletes from the University of Georgia. We distributed 2,396 pairs of shoes on that trip, but will never forget the pair we gave to one very special eleven-year old boy.

Josue wasn’t among those affected by the fire, but his need is certainly no less urgent. He’s in fifth grade and, like the rest of the children in his class, walks a long way to school. If you’ll recall, last time we told you that our team required a police escort because the neighborhood is so dangerous. Well, Josue doesn’t get an escort. None of the children get that luxury. But he makes the trip anyway, despite the very real threats of theft, violence and kidnap. Josue walks to school every day to fulfill the promise of an education—an opportunity to escape the clutches of poverty. The fact that the school building itself is the nicest thing around is but the visual symbol of a much deeper reality.

Shoes are an important part of this promise. In Costa Rica, they are required for school attendance. No shoes means no access to an education. So, having a shoe distribution at Josue’s elementary was fitting.

The team was quick to set up. Two rows of chairs facing each other allowing for one-on-one interaction between volunteer and child. Sizing mats to ensure proper fit. And bins of water for the ceremonial washing of the feet that, although symbolic, often serves the very real purpose of removing dirt and debris.

Josue had barely taken his seat when he caught our team’s eye. Amidst a sea of some pretty fit athletes at the top of their game, his petite frame and self-proclaimed clumsiness made him endearing. He’s an avid science fan, spending more time looking up at the stars than down at a ball. His gentle spirit takes more comfort in books rather than play. And yet he fit right in, taking especially to track runner Sarah. His newly proclaimed “best friend”, Josue generously gifted her the handmade bracelet off his wrist.

“I’m going to miss you guys,” were his last words to us.

Josue, we miss you too!