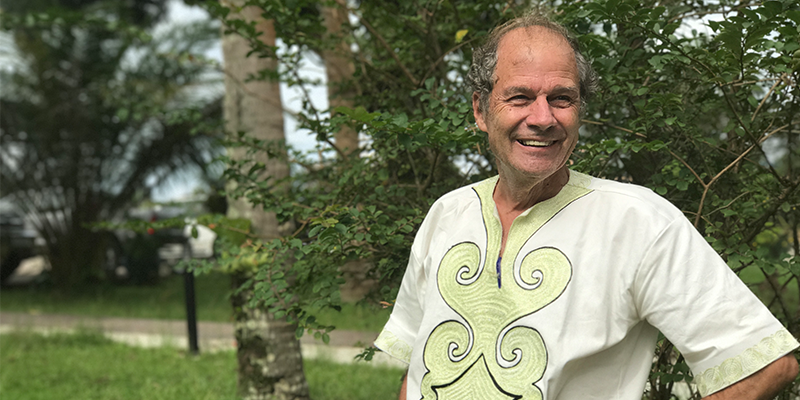 The trip had a less than ideal beginning. Our ﬂight left at 1:05a and arrived into Freetown Sierra Leone at 4:05a, which was four hours ﬂying with the time change. Loads of screaming children meant no sleep.

We went right through customs and immigration, changed money, bought tickets for the water taxi and were feeling good. But all that speed didn’t mean much because we had to get in the van to drive to the water taxi. It’s shocking that this is the fastest way to get to Freetown. The road is short but rough, and then we spend another 20 minutes waiting for the boat.

To our surprise, there’s great wiﬁ onboard, but the water is rough. One of the screaming children from the plane is now vomiting in a bag because she’s seasick. I remember how hellish it can be to travel with small children and empathize, but I have to look away.

A brief debate at the cost of a taxi to the hotel, which the driver wins, then David and I drag ourselves to our rooms for a few hours of rest before meeting Jon Bart for lunch.

I’m committed to getting in a run to shake oﬀ the cobwebs. It’s 80 degrees with an oppressive 95% humidity. I see quite a few other runners. They and many others are extremely friendly, waving and yelling encouragement. This beachfront is ragged but busy. So many pictures I would love to have taken but am not sure about the protocol.

David and I met with Jon for lunch. He’s easy to talk with, knows a lot about a lot. After a career as a US Fish and Wildlife researcher, including time in Antarctica, he moved lock, stock and barrel to Sierra Leone. He just celebrated his 71st birthday and is planning what the next ten years of his life in SL will be like and how the organization he founded, Village Hope, will help bring thousands into the middle class. Impressive stuﬀ.

After lunch, Jon took us to meet Ranita, one of VH’s entrepreneurs. She had an empty space and, after meeting Jon, decided to get in the shoe business. She’s also a university lecturer, just opened a restaurant, community organizer, wife and mother! Her daughters have every bit of the smarts of their mother. Ranita Jr (18) ran the store this summer before going to college in the school of medicine in September. She was totally on top of the numbers, stock, challenges, customer expectations. She’s going places, no doubt. We have lots of work to do to help Jon get the right mix of shoes and clothes, but both Ranitas are incredibly optimistic about the future. That’s no small feat in a place like Sierra Leone, among the poorest countries in the world.

Next stop was the Village Hope warehouse and retail store. They’ve gotten several containers of shoes over the last few months and have had to quickly develop systems, ﬁnish out both spaces, and learn a whole new business.

As a follow-up to that overview, we were going to spend several hours with the actual shoe sellers. Some are called “jumans” which is a kind of business that buys in bulk then sells in smaller quantities to others who can’t aﬀord a bigger purchase. Others are selling in the provinces far from Freetown, and others are the ones working in the retail store. Very diﬀerent models but they are incredibly passionate about getting the right mix of products at the right quality. That’s one of my favorite parts of the micro-enterprise business…at the end of the day, most of these folks don’t care about our “why.” They just want good inventory at a good price so they can make a living.

I did make one comment that made me feel dumb as soon as I heard the answer. We’re working with a great company called Shoes For Crews that makes a high-quality shoe meant for hospitality workers, construction sites, etc. Some of them have thick soles, for example, that are critical to the function but aren’t that stylish. So I asked the jumans if they could maybe market those shoes to workers in those businesses. Basic market segmentation, right? Except that in a country as poor as most of Sierra Leone is, people can’t aﬀord shoes for diﬀerent purposes. It has to work for going out, work, playing soccer, etc. A little red-faced when I considered, for all the eﬀort to not bring my biases to the front, how dumb that must have sounded.

The next morning began an all-day meeting, at our hotel, with the VH team. While we learned a tremendous amount that we’ll be sharing when we do a bigger SL update, that was not the coolest thing. Jon Bart is a smart cat, and he really sees part of his work as developing the potential in those he works with at Village Hope. So rather than him doing all the talking, which would have been the easiest thing to do, each of the project team leads presented on their work, the challenges and the outcomes.

1. Henry who oversees all footwear from port to shelf.

2. Dennis in charge of the ag program in the village of Massory as well as shoes in Makeni, the nearest big town.

3. Ibrahim who, even though he’s primarily the driver, is selling shoes and guaranteeing loans for two people from his village of Port Loko.

4. John Kanoe who is essentially the COO and a rock star.

5. Blessing in charge of the clothing program and is all her name suggests.

They were all exceptional, but one example of how VH is changing lives is that 18 months ago Moses had never touched a computer (he’s in his late 20s) and today he’s keeping the books and doing pivot tables in excel that an experienced pro would admire. He taught himself with a book and a mobile phone app.

I do have to give one set of numbers that speak to the impact our partnership has had for Village Hope. Since April of 2017, the Soles4Souls project at Village Hope has created/supported jobs for 180 people (full time/part time/temporary)! I cannot tell you how proud I am of our role in this amazing outcome.

David and I left the next day for Malawi (more on that later). That morning was some of the most intense rain I’ve ever seen. While we were being amazed by the downpour, only a few miles away the rain caused a mudslide that killed at least 400….600 are still missing. Two years ago, Sierra Leone would never have been in my consciousness. Now it’s a place where we know people and have friends, making this far more real. The world keeps getting smaller and farther apart at the same time.