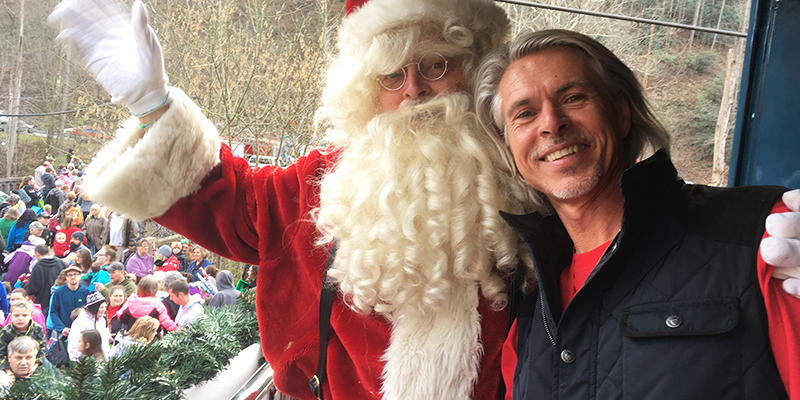 A Tale of Two Trains

Many of us know the opening lines of Charles Dickens’ A Tale of Two Cities, “It was the best of times, it was the worst of times.” And while I wouldn’t go quite that far in describing our recent trip to Appalachia, for me it gets close to Soles4Souls first experience with a 75-year old tradition known as Santa Train.

First, the incredibly positive. CSX, one way or another, has been delivering Christmas cheer with the Santa Train since WW II. Serving the stretch of coal country from Pikeville, KY to Kingsport, TN, the 110-mile rail route passes through some stunningly beautiful country rarely seen by outsiders. Stopping at places like Marrowbone, Toms Bottom, Haysi (pronounced hey sigh), Dante (pronounced “daint”), Kermit and Waycross, we heard from third generation Santa Train families who never bought into “Santa comes on a sleigh” because they saw him every year arrive by train! Along the way, we saw families who came down from even more remote houses and farms just to wave to the train and be part of the tradition. We met train buffs who drove hours to set up and take pictures of the locomotives crossing ordinary bridges, soaring trestles and crawling through grade-level crossings.

We left the hotel about 4:30 am and pulled into the last stop right on time at 3 pm. During those eight hours or so, Food City, CSX, AEP and Soles4Souls, in cooperation with more than 120 volunteers, distributed 17 tons of food, toys and clothes. At each stop, the Santa Train team swarmed off the train, talking and laughing with folks while Santa, at the back of the train, along with celebrity guest Ricky Skaggs, threw out plush toys to eager crowds of kids and adults. There was a lot of joy, sharing and holiday spirit that everyone could see and feel. The best of times.

But I also felt an edge to the day’s activities that hasn’t left me almost two weeks later. Behind many of those smiling kids were adult faces that hinted at something more complicated, maybe even a little desperate. Many were there without children and they came for the food, some showing up at multiple stops. They seemed to be on a mission that was more about day to day living than gathering up things for Christmas Day. In some towns, it was obvious that any prosperity that may have once come from coal was long gone, replaced by collapsed buildings and poor health.

I don’t mean to pass sweeping judgments on places I visited for 15 minutes…I know enough to know how superficial that is. However, I was not the only one who couldn’t ignore the feeling that these communities, with long histories of hard work, self-reliance and pride are now tough places with few opportunities. Maybe not the worst of times but I don’t think I met anyone along the way who wasn’t looking for better days.

As much as anything, it was the slap of reality that this is not some faraway place. I’m connected to the people there through the coal-mining history that runs through my own family (my dad was a coal miner until I was six. He spent the next 30+ years as a mine inspector. His brother was a coal miner his whole life. My paternal grandfather was a West Virginia miner who loaded coal cars by hand and died of black lung. My maternal grandfather started working the mines at age 9. He died from black lung at age 47. He was over six feet tall and weighed only 120lbs by the end). I’ve spent a lot of my life, with my parents urging and support, making sure that I have different options.

But the Santa Train, in all its history, glory and joy, was also a mirror that showed me that I’ve not come that far and am not that different. I was reminded, again, that the folks from Pikeville, Marrowbone, Dante and Dungannon are not “other.” They are our neighbors… even our brothers and sisters, mothers and fathers. I don’t know what it will look like, yet, but Soles4Souls will find a way to do more than show up once a year for the Santa Train.

We might be late to this 75-year old party, but I think we’re just getting started.