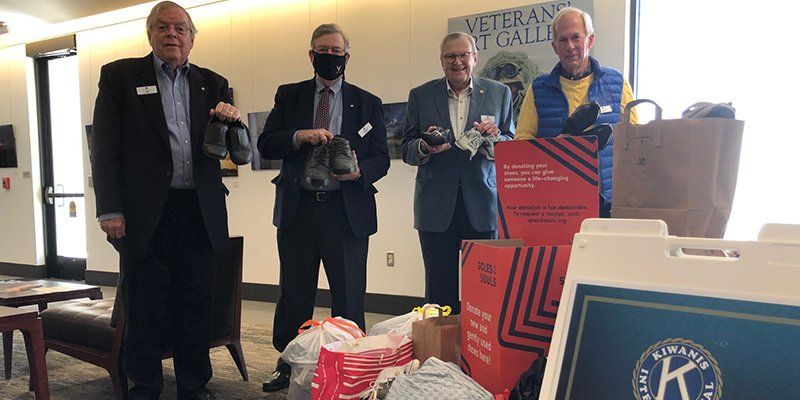 When George Smith, Lt. Governor of Kiwanis Division 11 in Virginia, was searching for an idea for his clubs’ annual service project, he wanted to find something that would truly challenge members and build camaraderie. After hearing Stephanie Hathaway, our Director of Operations in Virginia, speak at another club, George knew Soles4Souls would be the perfect recipient for their 2021 project.

In just the month of March, four Richmond-area clubs collected 2,917 pairs of shoes.  In countries like Haiti and Honduras, that many pairs of shoes can provide a full year of food, shelter and education for 4 families. The donation also has a huge environmental impact, keeping 3,629 pounds of textiles out of landfills.

“Behind that number was the way our club members rallied enthusiastically around the drive. Their enthusiasm extended from their own closets to those of family, friends, neighbors, work colleagues, and other organizations.  This ‘network’ was further bolstered by a press release we issued that received some local media coverage resulting in shoes being donated by the general public, as well,” said Jim Donahue, Richmond Kiwanis Vice President.

Initially having set an ambitious goal of collecting 1,000 pairs in the month of March, the clubs nearly tripled their goal through word of mouth and community outreach. Several local businesses, like Richmond Ballet and schools like Virginia Tech University actively participated through placing collection bins or promoting the drive on social media.

“They felt they were accomplishing something that provided a great benefit and it was relatively easy to do even with the pandemic. It is a worthy cause and the fact that it was so successful even during the pandemic…think what might be accomplished in a ‘normal’ year,” said George Smith.

Throughout the month-long drive, the value, importance and end-use impact of Soles4Souls was never minimized. Smith says he’s already been hearing “rumblings” of doing another drive next year.

“We were honored to partner with the Soles4Souls team as it promotes worldwide entrepreneurship and puts shoes on feet in need,” said Harry Harris, Richmond Kiwanis President.

To register as an individual or organization and start your own shoe drive, visit https://d3w3xmkqbp4vnt.cloudfront.net/shoe-drive-registration/.