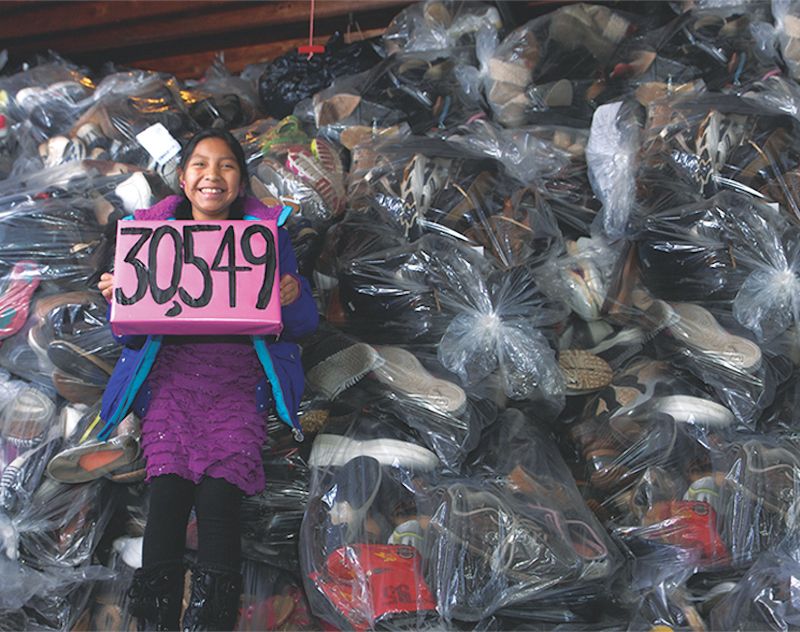 Separated by Miles, Connected by Hope

Poverty knows no gender barrier. 767 million men and women around the world are bound to life in its most extreme form. And your incredible support of our mission helps us break this cycle, creating sustainable jobs and providing relief through the distribution of shoes and clothing.

Yet every year on March 8, the world comes together for women, to honor those left behind by progress and to acknowledge their great resilience in the face of adversity. On this International Women’s Day, we too join in celebrating two exceptional women who embody the very essence of our work together and the power of a pair of shoes.

In many ways, Raquel and Traci’s worlds couldn’t be farther apart. Raquel’s an entrepreneur, wife and mother living in Honduras. Traci’s a teenager growing up in Rochester, New York. On the surface, they have nothing in common. But their connection runs deep.

Raquel and Traci are joined by a similar birth experience. Like many girls in countries where most subsist on less than $2 a day, their mothers were unable to care for them. For many desperate families, “abandonment” is a final attempt to help children survive unspeakable circumstances. Unfortunately, lacking the capacity for care, most of them fall through the cracks and become the most vulnerable of victims. But not these two. Raquel made her way to Our Little Roses, a safe haven for at-risk girls in one of the world’s most dangerous areas, and enjoyed a happy childhood until she was strong enough to stand on her own. Traci was rescued by a spunky Jewish single mom after spending the first few months of her life in foster care in Guatemala. She’s been lovingly raised in the U.S. suburbs ever since. Someone invested in them and it’s paid off.

They’re also united by this mission you support and a simple pair (actually many pairs!) of shoes.

Traci’s life-changing shoe experience stemmed from a desire to give back to her country of origin. When at ten years old she learned about Soles4Souls’ direct relief programs in Guatemala that provide children new shoes to keep them healthy and in school, she jumped at the chance to get involved. After exploring the various options, she decided to host a shoe drive. “Traci knew the used shoes she’d collect wouldn’t go directly to Guatemala but rather be used for other job creation programs, but she committed fully to the overall mission of helping people in need,” says Traci’s mother Nancy. It all started pretty small. “At first, I thought I could come up with 100 pairs of shoes just raiding my mom and sister’s closets,” giggles Traci. “But as the shoes started coming in and the community started talking and caring about my project, I knew I had to go all the way.” 30,549 pairs of shoes all the way to be exact!

Raquel’s transformative shoe moment came as she landed her first job, a seasonal position at a local shoe store. As exciting as it was to earn enough money for a new Christmas outfit (the very coveted “estreno”), that was but a preview of things to come. Little did she know that more than a decade, two children and a huge leap of faith later, she would be the proud co-owner of her very own shoe store. “Raquel exemplifies the spirit of Soles4Souls’ job creation model,” affirms our local non-profit partner Raul. “In a short time, she’s become one of the program’s most promising micro-entrepreneurs.”  Raquel and her husband Carlos opened the storefront this past February with an initial loan from an angel investor, naming it Camila’s after their young daughter. They work closely with Raul, trusting in his mentorship and procuring a steady supply of competitively priced, high-quality shoes collected by our network of volunteers. “Our operation has become self-sustaining,” notes Raquel proudly. And that’s exactly what the program is meant to do.

It’s at this intersection that our two stories converge. Through the power of a pair of shoes. Raquel and Traci have never met, and it’s unlikely that any of the shoes that Traci collected four years ago ever made it to Raquel’s store. But they did make it into the hands of someone like her. And that’s just as powerful.

The two have since walked different paths. Now fourteen, Traci looks to a bright future, confident in her ability to conquer any obstacle. And she’ll be joining us for a shoe distribution service trip to an Arizona Reservation this summer. Raquel’s future is equally bright. Her shoe business affords her a way not only to build a future for her two children, but also to give back. “I come from a very humble past, so I understand the struggles of our people,” reflects Raquel. “I’ve been given a hand up and now it’s my chance to do the same for others.” And she has. A hand up to the customers who purchase her quality shoes at a good price, providing their families relief, health, dignity and hope. A hand up to the struggling mothers and sick elders to whom she gifts a pair of shoes they sorely need but can’t afford. And a hands up to other girls from Our Little Roses as she fulfills her vision of offering them safe employment as they transition out of the home. “It’s like a chain,” she adds. “One person helps another, and then they help another, and so it goes.”

Raquel’s right. It is a chain. And you’re a crucial part of it. Raquel and Traci’s adoptive families invested in their human potential. Traci invested her time turning trash into treasure. Raquel invests her entire being into building a legacy for her family and community. And you’ve invested in our mission, helping us distribute 35 million pairs of shoes in 127 countries and all 50 U.S. states since 2006.

Today, in honor of International Women’s Day, we invite you to continue empowering women all over the world by donating funds below or starting a Women4Women shoe drive. Your support will lead them toward a path of prosperity, equality and inclusiveness. And that creates a huge positive impact across the board. Because a single pair of shoes does have the power to change a life.