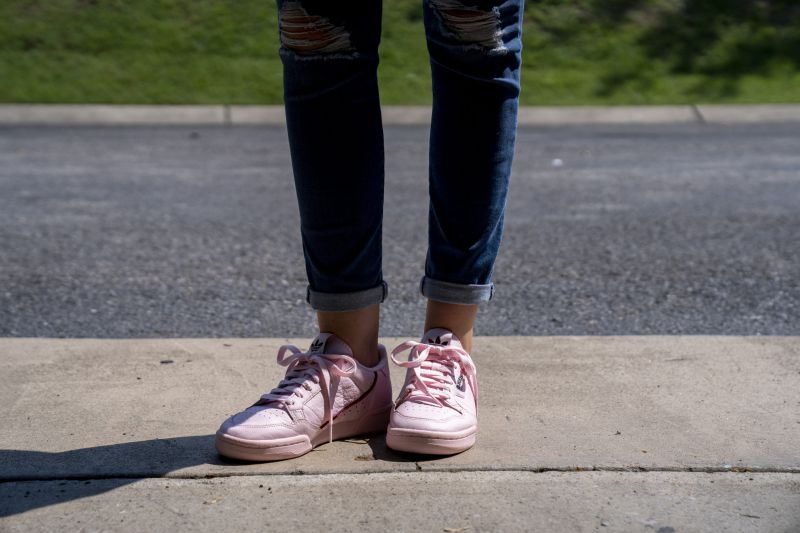 A Letter From Khadijah Williams – A Hero for Homeless Youth

But I need you to know what happened to me because I’m on a mission to help make sure it doesn’t happen to anyone else.

My story starts when I became homeless at just 6 years old.

For nearly 20 years, my family and I lived in and out of cheap motels, in bus stations, in abandoned homes, and even outside on old mattresses.

During that time, my life was marked by endless movement as my family walked nearly everywhere we went. We had no other way to get to those bus stations… Those middle-of- nowhere, roach-filled motels… Those abandoned homes…

I remember how my knees, toes, and soles ached. Pain I feel to this day.

Sometimes, my shoes were too small but most often they were too big. My mom’s logic was sound: We never knew when we’d receive another pair of donated shoes. So, it was better to grab a pair I’d grow into eventually than one I’d outgrow in a few months.

But have you ever tried to walk in shoes that are too big?

Your toes curl to try to keep them on. You shuffle a bit, so they don’t slip. And when they do slip, blisters form on the balls of your feet.

And the pain isn’t only physical.

At school, my too-big, used, and always ugly donated shoes made me a target for cruelty. The kids at school knew, so they teased me, chased me, and beat me up.

I wanted to feel loved and cared for. But instead, I felt “less than.” Ashamed. While I didn’t fully understand it at the time, what I was truly searching for was the dignity a normal pair of shoes afforded to my peers, but that was denied to a little homeless girl like me. 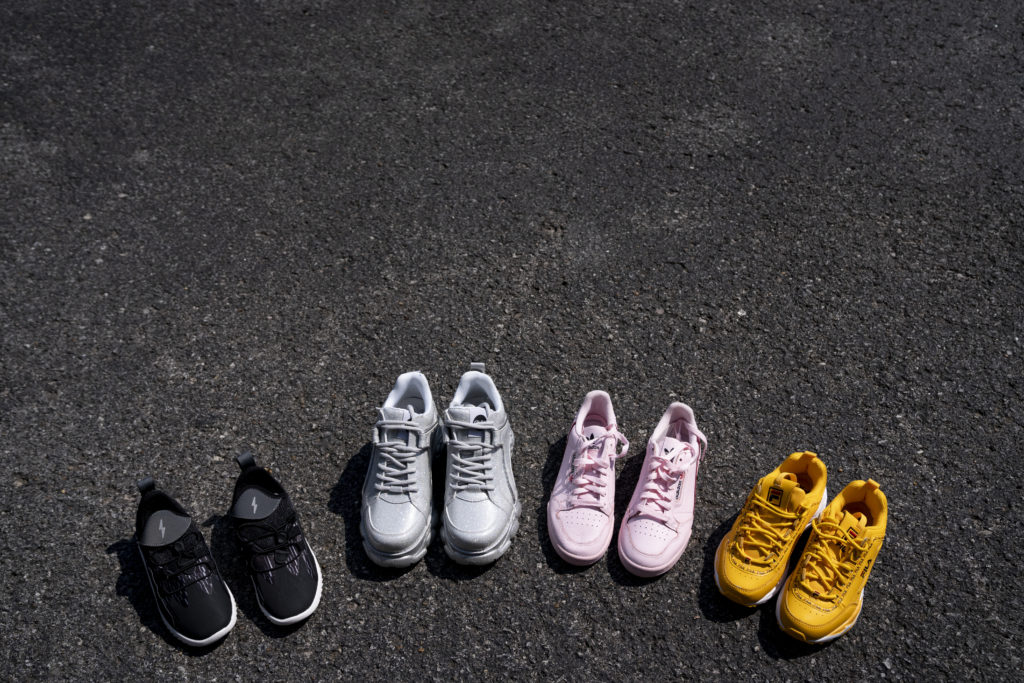 And that’s why when I met the folks at Soles4Souls and I saw how they had turned everything I thought I knew about shoe donation on its head, I knew right then and there, it was something I needed to be a part of.

For more than a decade, Soles4Souls has been using shoes and clothing to not only provide relief to those in need, but to do so in a way that puts the dignity of those they serve first in everything they do.

They launched their 4EveryKid program in response to a startling statistic: 1.5 million children in the U.S. are experiencing homelessness and all of them face the same struggles with shoes I faced.

But 4EveryKid is nothing like the kind of shoe drive program I experienced growing up.

It wasn’t just that I had to wear donated shoes. It was that they were clearly someone else’s cast-offs.

Often, my shoes were already worn out by the time I received them. And always, they were ugly.

You know… the kind of donations people make thinking, “Well, ‘those people’ have nothing, so they’ll be grateful to get these.”

This kind of attitude is where the good-intentioned act of giving to those in need can go wrong and it’s what makes 4EveryKid so much different.

Yes, 4EveryKid is providing donated shoes to children experiencing homelessness. But they aren’t just any donated shoes — like the ill-fitting, ugly shoes I had as a kid. They are brand new, name brand, properly fitted athletic shoes.

And the goal is to provide a new pair for every kid every single year. 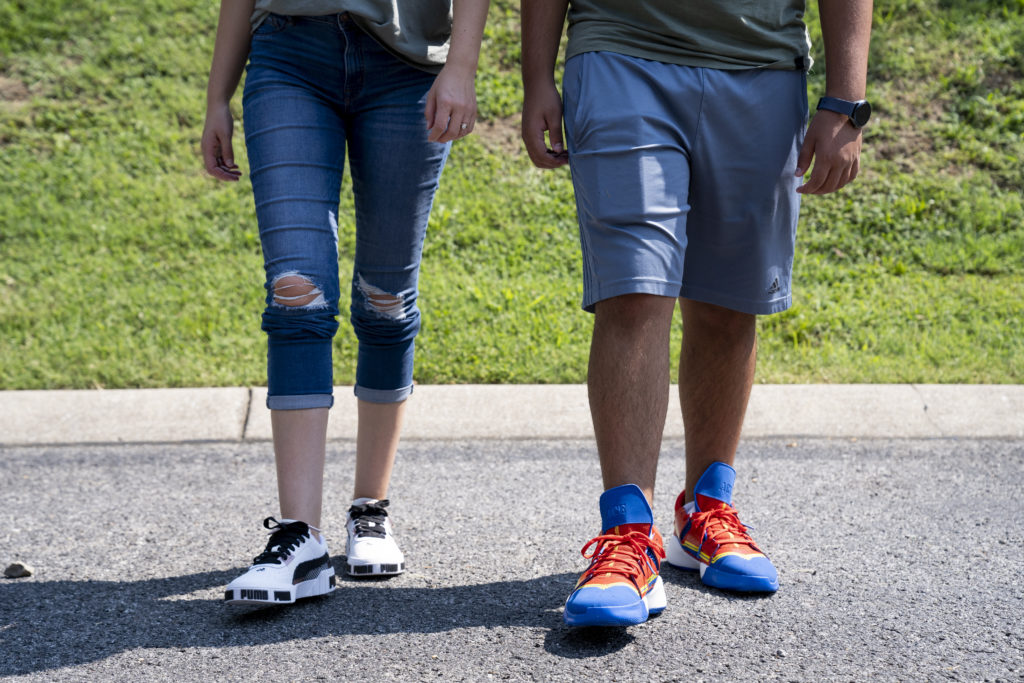 As a woman who experienced childhood homelessness and the desperate need for shoes growing up, it’s hard to express how much this kind of program means to me.

Instead of feeling ashamed and trying to hide their shoes from the cruelty of their classmates, these kids proudly show off their new shoes as a peer among equals.

And here’s how this kind of dignity-first approach makes a tangible difference in their lives.

School officials tell us shoes are essential for students to succeed academically. At a recent Soles4Souls shoe distribution:

One-third of students said they had missed school sometimes because they lacked proper footwear.

More than half of them said they had trouble paying attention in class because their shoes hurt their feet.

A good pair of shoes can change a child’s future:

* 54% of Soles4Souls’ school partners say students have better school attendance once they get new shoes.

* 70% note an increase in physical activity.

* 95% say their students are more confident because of their new shoes.

The fact is that Soles4Souls’ dignity first approach is working.

And it makes sense too.

I’ve already revealed to you a small glimpse into my life as a child experiencing homelessness. But did you know my story has a happy ending?

I write to you today as a Harvard graduate, a nationally recognized advocate for homeless youth, and an education policy professional. 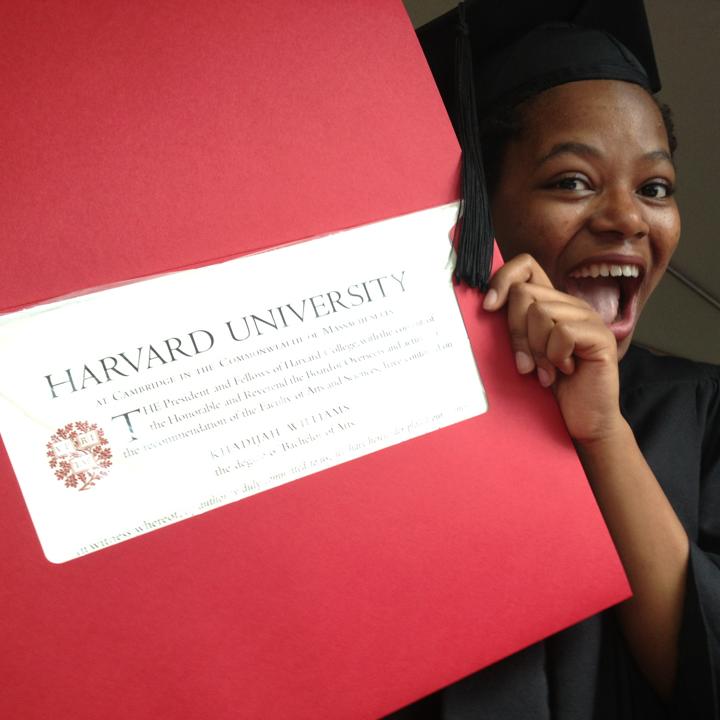 How did that happen?

Did I pull myself up by my own bootstraps?

Did I triumph over hardship because I believed in myself?

That’s not how I’d characterize it.

Instead, my story is about other people believing in me and taking the time to support and motivate me.

It’s about other people offering me the tools and tangible help I needed to succeed.

It’s about other people seeing me and recognizing my inherent dignity.

What I hope you understand is the emotional impact of living with so much shame and uncertainty… and what it would feel like to not only receive something that’s yours, that’s new, that’s sized and picked just for you, but also the simple knowledge that someone cares.

For me, as a child experiencing homelessness this would have meant I was worthy.

It would have meant I had dignity.

And Soles4Souls is hearing that sentiment echoed across the country as they get shoes to kids who might otherwise not have them.

“They fit me! They look awesome, I feel like I will fit in with the rest of my friends.” – 10-year-old boy, Nashville

“I am able to run around with my friends without my feet hurting…” – 11-year-old girl in Washington, D.C.

“They make me feel so special.” – 6-year-old girl, Middle TN “I can go anywhere and feel confident AND be comfortable.” – 14-yr-old girl, Portland

One incredibly simple and affordable way to show kids without homes you believe in them — that they’re worthy of your belief in them — is by financially supporting the Soles4Souls 4EveryKid initiative.

Soles4Souls is truly a world-class organization tackling poverty by not only providing for the physical needs of those who are struggling, but by nourishing their very souls.

You see, Soles4Souls brings this same kind of dignity-first approach to every single one of their programs.

For example, their Micro-Enterprise Program helps people in developing countries launch and sustain their very own small businesses selling donated shoes and clothing.

For a single mom named Merary, being able to work from home felt like an impossible dream. Really, finding any sustainable work in Honduras seemed out of reach.

For years, Merary tried to care for her family by cleaning houses. The work required long days away from her children — both of whom have severe disabilities — and provided very little income.

That was a few years ago, though — before Merary became a business owner. 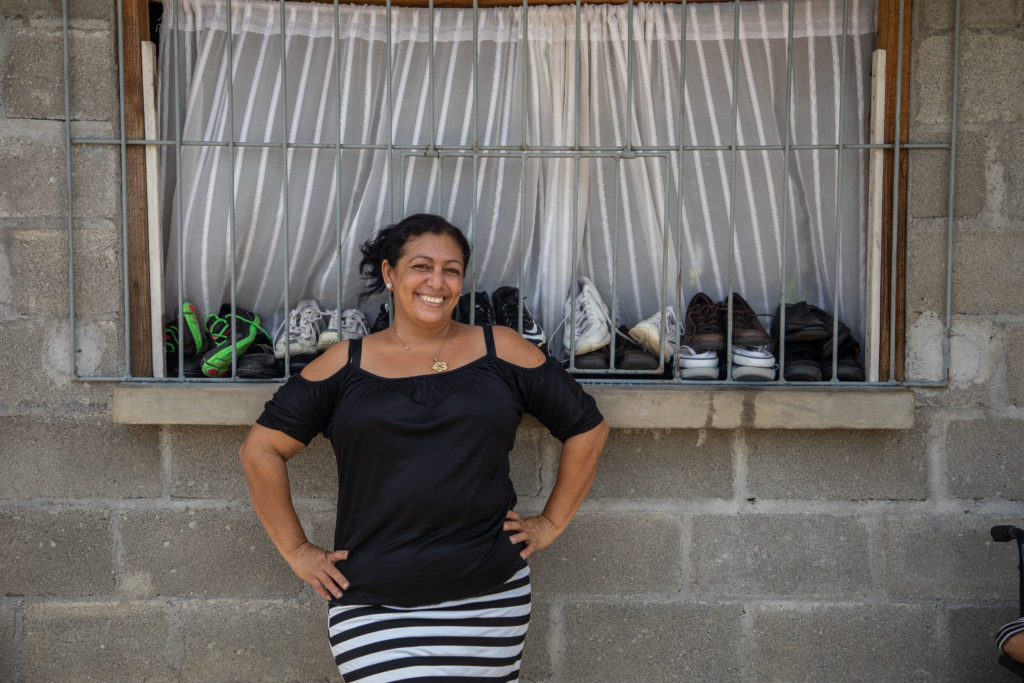 Yes, a business owner, thanks to the financial support of people just like you.

You see, through the micro-enterprise program, Soles4Souls empowers aspiring entrepreneurs like Merary to live out their dream to be their own boss.

What I love about this program is that it is intentionally NOT about shipping cast-off, worn-out old shoes to helpless poor people in third world countries.

Instead, each micro-entrepreneur participating in this program is treated as someone who is as inherently worthy of dignity as the rest of us.

They are a business partner, not a charity case.

Through the support and donations of people like you, each micro-entrepreneur is first trained in all the necessary skills needed to run their own shoe business and then provided with gently used shoes based on what they know will sell in their communities.

Instead of poor people being left with old or ugly shoes unwanted by the rest of society, they receive only what they choose based only on what their customers actually want.

As a result, these new business owners earn a dignified income that lifts them and their families out of poverty while providing an entire community with access to affordable shoes.

These days, Merary has the tools to produce an income while taking care of her children.

Lines of shoes are carefully organized on her windowsill, and before she’s been able to settle into the day, customers arrive.

“There’s hope now that little by little, things are going to get better,” Merary explains.

By taking a dignity-first approach, Soles4Souls brings a unique perspective and unique solutions to the challenging problem of poverty.

Not only that, but because of their generous supporters as well as their unique relationship with industry leaders, they’ve proven capable of mobilizing at a moment’s notice to respond to disasters both natural and man-made.

For example, a couple years ago, Soles4Souls began programs in Beirut to provide shoes to children in several different communities and schools.

Because of that program and because of Soles4Souls’ existing relationship with Skechers, when Beirut was hit by the third biggest explosion in the world, Soles4Souls was able to facilitate the generous donation of more than 52,000 pairs of shoes for those in need.

More recently, after Nashville, TN faced terrible storms, causing floods and devastation in many communities, Soles4Souls joined several other organizations to offer donations, including brand new socks and shoes, to the storm’s victims.

As you can see, Soles4Souls has many programs worthy of your support. But today, I’m asking you to support the program closest to my heart, 4EveryKid.

It’s tough for most of us to imagine not having our basic needs met. It’s even more difficult to imagine being homeless.

But for 1.5 million kids in the U.S., that’s their everyday reality.

I understand it personally because I’ve experienced it.

I experienced trying to hide how poor we were, but knowing my dirty clothing, unkempt hair, and worn-out shoes betrayed my reality to my classmates.

And today, as a Harvard graduate who advocates for youth experiencing homelessness I know the kind of assistance needed to turn a homeless childhood into a success story. 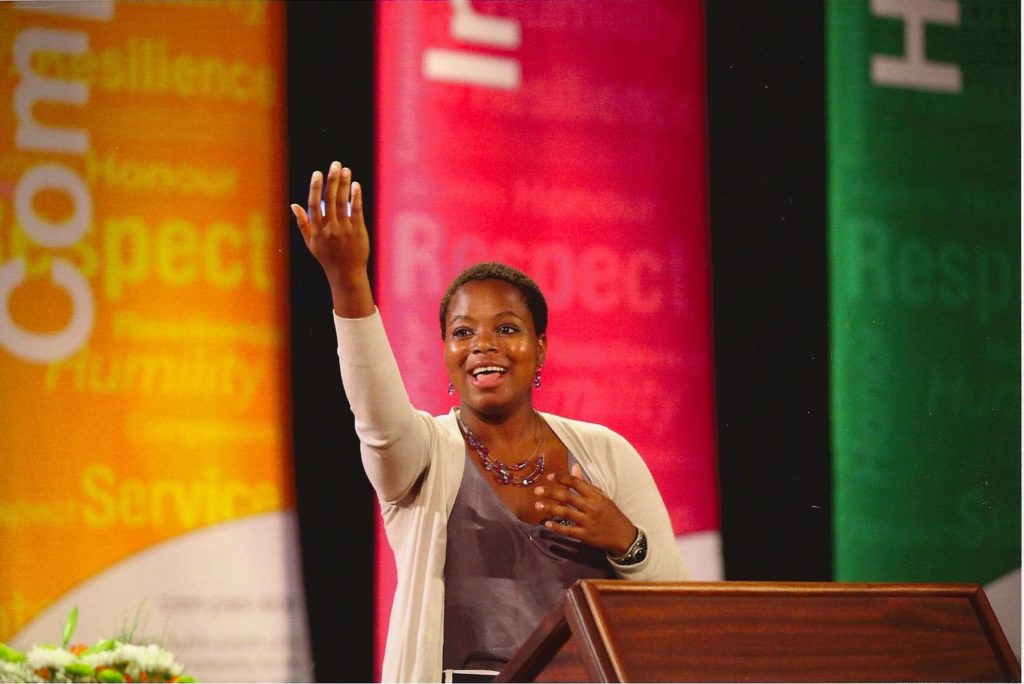 The fact is, my story might’ve ended much differently if it hadn’t been for the people who saw me as more than just a “homeless kid.”

The people in my life who believed in me. Who knew I could break the cycle of poverty. Who told me as much. Who reminded me I was worth something.

That I deserved dignity.

I wonder: Would you be willing to do that for a child experiencing homelessness today?

For every $20 you give, Soles4Souls can provide a new pair of brand-name athletic shoes to a child experiencing homelessness.

That’s one less child who has to experience the shame of “looking” homeless because of their worn-out shoes.

One less child who has to experience teasing and bullying from their classmates.

One less child who can’t concentrate in school and fully participate in activities.

Or even if it’s $5 or $10, every single dollar helps Soles4Souls serve more children in a way that makes the biggest possible impact in their lives.

We can do more good when we do it together. Thank you for your support.