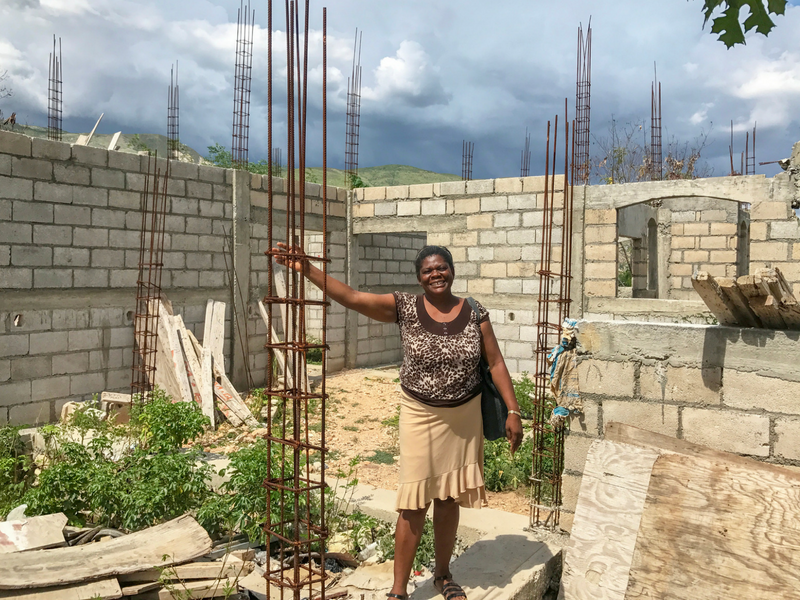 Distributing shoes to some of the world’s poorest communities is impactful in many ways. There’s of course, the gift itself, which keeps children healthy and in school. But just like pebbles dropped in still water create waves well beyond their point of impact, the people who come together to make them possible produce unexpected ripples of good.

Take our January trip to Haiti. We did a lot over six days with the help of volunteers from BioPed, a Canadian company specializing in foot pain and custom orthotics. There were the sizing and fitting of 550 smiling children with brand new shoes over four distribution events. Then there was a meeting with our micro-enterprise partner The Haitian American Caucus; and a very special visit with Ginette, a program participant, at the home she’s been able to slowly build with its earnings. Add in a few hours at the beach to fulfill a promise to the young residents of a local orphanage and a community service day. All in all, a great trip. Lots of ripples.

Little did we know, however, that one small encounter would produce a genuine tsunami of goodwill.

We met Pierre, a very bright and beloved three-year-old boy, and his family in Verette. Children from various schools had joined us at the community church, eager to receive the gift of shoes. And we succeeded in our goal of finding the perfect pair for each of them but one. You see, Pierre’s left foot is severely twisted inwards and downwards. And because he lacks both the means and access to the medical care necessary to correct his club foot, it likely always will be.

So Pierre does the best he can. He walks purposefully, concealing his exhaustion with a dignity beyond his years. This only makes his condition worse, but he has few other choices. And when his strength fails him, his older sister and brother carry him the rest of the way.

There would be no perfect pair of shoes for him. But unwilling to give up, our team found the next best thing: oversized sandals to cushion his feet from the rocks and hard ground. And Pierre’s unbounded gratitude made the moment perfect after all. Respite from his pain was all he wanted…nothing more. “My heart was there in that moment with Pierre,” reflects Candace Tomic, one of our volunteers. “You either get it or you don’t, and I really can’t imagine missing the magic.”

Just as the team reveled in this magic, the harsh realities of Pierre’s life in Haiti knocked them upside the head. Short of treatment, this boy needed a wheelchair he would never afford. That’s when Pete Scully, another BioPed volunteer, and S4S Canadian Board member, picked up the phone. Within minutes he had secured a donation from a manufacturer. All we’d have to do is figure out the logistics to deliver it.

Fast forward to May. We were once again headed to Haiti for more shoe distributions and one very special delivery, this time with volunteer student-athletes from the University of Missouri. And as fate would have it, our team leader would be Megan Welsh.

Megan lost her cherished father a few short months ago. The wound was still fresh in her heart. The loss almost unbearable. Yet on this trip to a country not her own, she would find closure. You see, just like Pierre, Megan’s father was born with club feet. Unlike Pierre, however, he received proper care. After multiple surgeries, casts and braces; and nearly three years of comprehensive therapy, his condition was a thing of the past. So to be tasked with delivering a wheelchair to a brave little boy who was so different yet so like her father was a gift of healing to both.

The task would soon prove to be an exercise in faith.

Faith that the wheelchair would materialize. Although Pete had secured the donation, our plans to accept it fell through a few days before the trip. Calls and emails flew out to our network, and deliverance came with a local shoe drive partner. A leader in the wheelchair industry, Permobil’s product had made its way outside of its Nashville headquarters before, but never under these circumstances. So just one day before Megan’s scheduled departure and without expectation of reciprocity, Permobil handed us Pierre’s gift of mobility.

And faith that we would find Pierre. In a country where coordinates are irrelevant, our primary point of contact with the family was a cell phone. As luck would have it, our pre-trip calls didn’t go through. Disconnected. “Bring the chair,” urged our local partner. “They’ll turn up.” So the calls continued once in country, this time to activate a human word-of-mouth network. And they did indeed turn up on the fourth day.

And faith that we would keep our word. On that fourth day, our team was distributing shoes in the coastal community of Montrouis, about 35 miles away from the family. So when the local preacher delivered word that we were in town and they hopped into a “tap tap” (a colorful share truck/taxi) they couldn’t pay, they did so with trust.

The long-awaited encounter unfolded in the middle of a hot soccer field. And it was then when the tsunami Pierre set off in January finally hit with force. After crossing three countries. Over four months. Captivating hundreds of newfound friends.

Pierre’s parents knew who to approach, perceiving the quiver in Megan’s outstretched arms. She recognized so much in him. And as she placed the familiar stranger in his new wheelchair, she knew her father would have cherished this moment. Love. Pride. Healing.

“This was by far the best, most spiritual, most meaningful moment in my life,” she recalls.

And so today Pierre’s “best” is a lot better. No more painful walking or carrying or missing out. He can be a kid again.

And there are no words for that. Or for the amazing people who support our mission. From Candace, Pete and the entire BioPed family; to the crew at Permobil and the University of Missouri; to our dedicated local partners; to Megan and the passionate team at S4S; and to you—you who make it all possible. Thank you for helping us deliver the gift of shoes and so much more!!